Poetry pamphlets, collections and anthologies, C format paperbacks with card covers and handmade, stitched bindings
The ABPress will concentrate especially on authors who were connected in some way with the Albion Beatnik Bookstore, Oxford, and its events and many poetry readings and almost weekly workshops.

SCROLL DOWN TO SEE TITLES 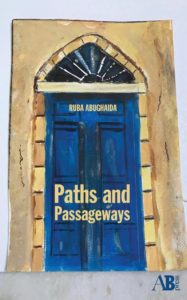 The word for ‘path’ in Arabic means so much more than can be translated into English. It signifies a familiar or even intimate neighbourhood with connotations of home and safety. The Arabic word for ‘passageway’ can mean a maze within a city, often an ancient walled city within whose twists and turns are the resting points of its street architecture, its trees and natural history, its terrain, neighbours and general street life. The doorway in a traditional Arabic home – very much like the one depicted on the front cover painting – is both a path and passageway. It serves as a gateway, linking a courtyard with to the world without… 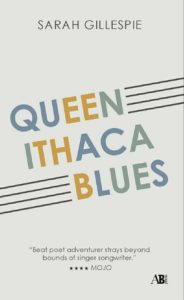 “Dipped in song, these are dizzying poems in which lovers are skyscrapers and words walk on wires between them. Bright with horror and stricken with laughter, Sarah Gillespie’s lyrical collection lives in the extremities, dealing with loss, vertigo and joy.” – CAROLINE BIRD

Sarah Gillespie is the most interesting singer / songwriter in the UK at the moment. Her four albums have received widespread critical acclaim and much radio airplay in the UK and on public radio in America. She combines demotic, raw beat poetry lyric with a wacky and individual musical style that nods to jazz and to folk. Her poetry bristles with brio. 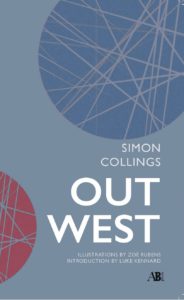 “What we find in Collings’ Out West is a kind of exploded Western, where generic tropes and the conventional wisdom of common-sense reasoning merge seamlessly with the unexpected and inexplicable… It is solely the marvellous and the imaginary that matters… and this is the real frontier Simon Collings explores.” – LUKE KENNARD

Simon Collings is an Oxford-based writer who contributes poems, essays and criticism on poetry and stories to numerous magazines and journals. 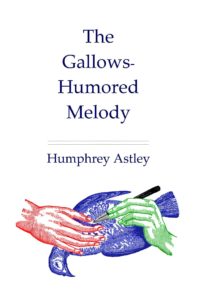 The Gallows-Humored Melody has two connected themes of music and mortality; in other words it charts a crotchet decay. The posh blurb says it “explores relationships between creation and destruction.” It is a cycle of eighteen poems, linked on these themes.

Humphrey ‘Huck’ Astley is a writer and singer / songwriter based in Oxford. His works include the PRS Foundation show and three-part album Alexander the Great: A Folk Operetta (PinDrop, 2013-15), and the pamphlet Stones through the Windows to the Soul (Rain Over Bouville, 2014).

A coptic bound book with ABP endpapers, stitched by Lucie Forejtova of Immaginacija – a brilliant artisan brand of bespoke stationery designed for every day use rather than as the fodder of interior design (although they are beautiful products as well!) – for the Albion Beatnik Press.

This is the first full poetry collection by local poet, activist and lecturer George Roberts. 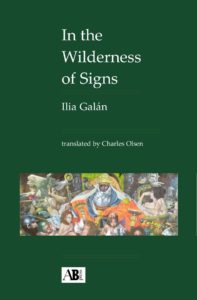 In the Wilderness of Signs

Ilia Galán was born in Spain in 1966. He is a Lecturer in Aesthetics and Theory of Art at Carlos III University at Madrid; he is currently an Academic Visitor in the Faculty of Philosophy at the University of Oxford. As well as poetry, he writes novels, essays and occasional journalism.