This is one of only two novels Edith Wharton set in New England. It deals with unprivileged, poor members of a remote, rural town rather than the urban and leisured high class most typical of her literature. It was neglected by critics at the time of its publication in 1917 and sold poorly, possibly because of its uncomfortable content, although Wharton herself regarded it with favour. Appreciation of its literary worth has risen steadily since then. Marilyn French, for instance, declared that its heroine had the “courage to be sexual.” It is the neglected masterpiece in Wharton’s work. 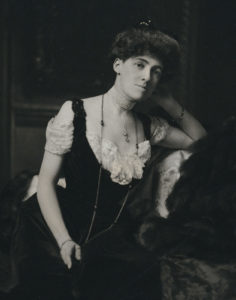 EDITH WHARTON (1862 – 1937) had an extremely wealthy background in New York City: private tutors and a governess provided her home education, and she spent six years living in France as a child (France became her main home from 1914). Wharton was well connected socially, politically and, in later years, with the literary world: Henry James was a great friend (though her meeting with Scott Fitzgerald proved to be disappointing to both: “to your generation,” wrote Wharton, “I must represent the literary equivalent of tufted furniture and gas chandeliers”). Her marriage was unfulfilling in every way (she divorced in 1913), and passion came only in her mid-40s when she embarked on a relationship with Morton Fullerton, a louche cad, which ended unhappily for Edith.

Wharton lived luxuriously. She toured Europe by chauffeured car or yacht, and indulged her instinct for interior decoration, renovation and gardening. Her first book, The Decoration of Houses, was published in 1897. Such patrician mode was encouraged by an admiration for the French Empire, and it prompted her refusal to donate to Teddy Roosevelt, her great friend, when his policies became too populist. She was the American in Paris, and knew little of America other than New York and New England (she and her husband had built a 42-room mansion in Lenox, Massachusetts, The Mount).

As a child, Wharton developed a great appetite for writing, though her mother had forbidden her to read a novel until she married. Her first novella was written when she was 15. An initial lack of success and scant encouragement saw Wharton turn to writing travel pieces. Her first short story was published only when she was 29, and her first collection of short stories, The Greater Inclination, when 37; The Touchstone, her first extended piece of fiction, was published a year later, and is the first of her books to examine the faded fortunes of New York society life. Wharton’s first novel, The Valley of Decision, was published in 1902; The House of Mirth made her popular in 1905, the book was considered to be in many ways scandalous; Ethan Frome (1911) won her even more acclaim. Wharton was a prolific author, and published over forty books — 15 novels, 7 novellas and over 80 short stories. Her polished writing style was flooded with observation, wit, and satire. The Age of Innocence (1920) was awarded the Pulitzer Prize in 1921; even though the jurors had all voted for Sinclair Lewis’ Main Street, their decision had been overturned by the Pulitzer board. She wrote to Lewis that when she had “discovered that I was being rewarded — by one of our leading Universities — for uplifting American morals, I confess I did despair.” 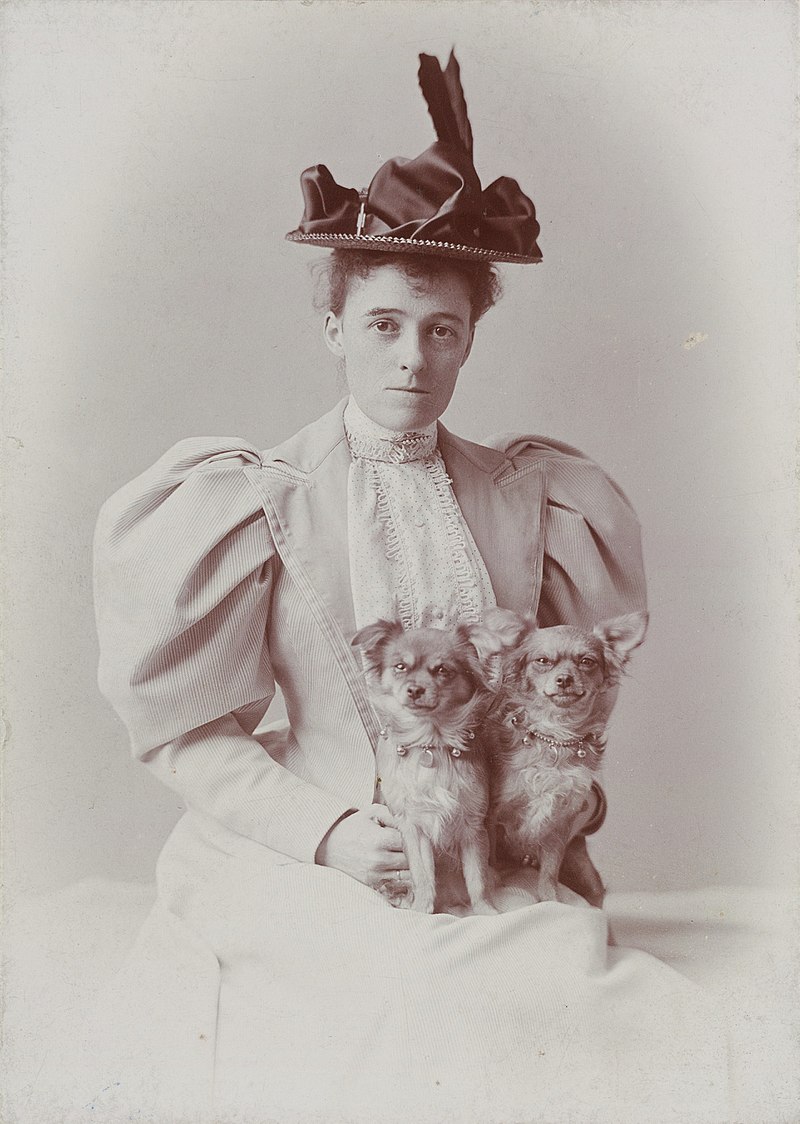 ”…her standard press photograph shows her in pearls and décolletage, dressed for her public as for a ball.”
– Janet Flanner, The New Yorker, 1929

Edith Wharton’s Summer is set in New Dormer, a remote and rural town in New England. (This setting was based on the Berkshire town of Windsor, near Lenox, Massachusetts, where Wharton had built a forty-four-room mansion in which she had lived for nine years from 1902.) She referred to this book as “my hot Ethan.” Ethan Frome, set in New England also, had been published six years earlier and was the novella that had secured her literary reputation after The House of Mirth had won her acclaim and a following. Ethan Frome and Summer were not set in thecomfortable norms of high class society. The characters in Summer have neither money nor status, have little privilege and scant education or refinement, and none of the manners and leisure associated with life in, say, New York, whose culture Edith Wharton had proved to be so skilful at depicting hitherto.

Wharton regarded it as one of her best novels, although it was neglected at the time of its publication, and it received mostly unenthusiastic press review. It was removed even from the shelves of Lenox Library, where ex-resident Wharton had been an enthusiastic library trustee and generous donor. Its controversial subject matter did for it.

A young woman, Charity Royall, yearns for a more sophisticated lifestyle than the one she enjoys in the repressed, ultra-parochial and isolated town of New Dormer, where she works as a librarian. Just as her understanding of books is limited, so, too, is her understanding of life – her childhood had been spent in the mountains – and Charity lacks any knowledge to define even what her aspirations might be. At the heart of the book is the emotional struggle involved in her relationship with the two men in her life: her heavy drinking and protective guardian, Lawyer Royall, and a young architect, Lucius Harney, who is visiting the area and embodies all that Charity thinks she might wish for her own fulfilment. Her summer affair with Harney is a first taste of romantic love but ends with Charity’s disillusionment. This is a summer that signifies a coming of age. It is a tale of frustrated dreams and impermissible sexual passion. Charity is determined to accept reality, to adopt maturity and to make sense of her life…

Summer was written in spring 1916, as Wharton’s time and commitments elsewhere allowed. Edith Wharton had been fundraising for the war effort in Paris and was heavily involved in relief work with several large charities for refugees and orphans. She was supremely adept at this work, and was awarded later the French Government’s Chevalier of the Legion of Honor. But the work was demanding and offered her little respite; the war’s unremitting length and devastation had depressed Wharton, who was outraged also at America’s non-intervention. She left Paris for a few weeks to stay at Fountainebleau and recuperate, where she placed to one side other active writing projects and started this book with intent. Wharton wrote to her editor that she was writing a “‘long short’ story, of the dimensions of Ethan Frome. It deals with the same kind of life in in a midsummer landscape, and is a thing I have had in my mind for several years. I expect to finish it in a few weeks and I imagine it will reach a length of about 30,000 words.” The book took six weeks to complete and, when completed, was nearly twice its intended length.

The war had completely depressed Wharton. Its unremitting length and devastation were by the spring of 1916 more than apparent. This writing project might be seen as escapology from her surroundings, but its content can only have been inspired by the war and the plight of its refugees who she had sought to help in Paris. The book’s heroine is suitably called Charity, and, taken from her childhood surroundings in the mountains, she leads a life that is comparable to refugee status. The book’s sexual theme can be seen as a reflex to Wharton’s own upbringing, and every aspect of Charity’s upbringing and life is a long way away from Wharton’s own regimented experience. This book might be seen as Wharton’s critique of societal repression. 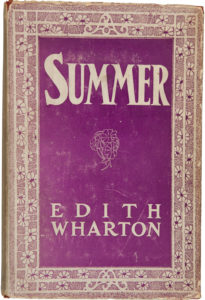 “…it ranks with the author’s lesser tales…” “…far less complex than the majority of Mrs. Wharton’s novels.” – The New York Times

“…an air of falsity about this new invention of hers…
“The trouble with Summer…is that Mrs. Wharton rather forces her note. It is not that seduction as a scheme for literary bouleversement is a little out of date. There is no such thing as a catastrophe too trite to be worth reciting. It is only that Mrs. Wharton, always inclined to be sub-human, is much too callous in the uses to which she has put this seduction…
“A good shipwreck, moral or physical, is by no means the least satisfactory of fictional themes, but no author has a right to run up and down the shore line waving a harmless heroine to destruction. What one dislikes in Summer is the undoubted purpose of the author to dish the heroine for the sake of the sensation of dishing her.” – FRANCIS HACKETT, The New Republic

A girl came out of lawyer Royall’s house, at the end of the one street of North Dormer, and stood on the doorstep.

It was the beginning of a June afternoon. The springlike transparent sky shed a rain of silver sunshine on the roofs of the village, and on the pastures and larchwoods surrounding it. A little wind moved among the round white clouds on the shoulders of the hills, driving their shadows across the fields and down the grassy road that takes the name of street when it passes through North Dormer. The place lies high and in the open, and lacks the lavish shade of the more protected New England villages. The clump of weeping-willows about the duck pond, and the Norway spruces in front of the Hatchard gate, cast almost the only roadside shadow between lawyer Royall’s house and the point where, at the other end of the village, the road rises above the church and skirts the black hemlock wall enclosing the cemetery.

The little June wind, frisking down the street, shook the doleful fringes of the Hatchard spruces, caught the straw hat of a young man just passing under them, and spun it clean across the road into the duck-pond.

As he ran to fish it out the girl on lawyer Royall’s doorstep noticed that he was a stranger, that he wore city clothes, and that he was laughing with all his teeth, as the young and careless laugh at such mishaps.

Her heart contracted a little, and the shrinking that sometimes came over her when she saw people with holiday faces made her draw back into the house and pretend to look for the key that she knew she had already put into her pocket. A narrow greenish mirror with a gilt eagle over it hung on the passage wall, and she looked critically at her reflection, wished for the thousandth time that she had blue eyes like Annabel Balch, the girl who sometimes came from Springfield to spend a week with old Miss Hatchard, straightened the sunburnt hat over her small swarthy face, and turned out again into the sunshine.

“How I hate everything!” she murmured.