This is F. Scott Fitzgerald’s masterpiece, published in 1925. The main character, the young and mysterious Jay Gatsby, ex- of Trinity College, Oxford, is infatuated by the beautiful Daisy Buchanan. It ends in tragedy.

This is a cautionary tale against the excess of the American Dream, and exposes the failings of what became known as the ‘roaring twenties’. Not surprisingly it received poor reviews and scant sales; Fitzgerald died sure that he had created no lasting effect on the literary world.

FRANCIS SCOTT KEY FITZGERALD (1896-1940) was so ambitious for his literary career that he finished at Princeton before he had completed his degree. His first novel was published when he was 23: it yielded royalties enough to afford marriage to Zelda. He completed only four novels; his best known, The Great Gatsby, was published in 1925. Fitzgerald was a standout figure in mid-1920s Paris where, with other American émigrés such as Stein, Hemingway and Pound—together known as the ’Lost Generation’—he lived a life of excess. His time hereafter in America proved to be difficult: Zelda’s schizophrenia, his developing alcoholism and constant financial difficulties meant that, in H. L. Mencken’s words, “The case of F. Scott Fitzgerald has become distressing.” He was torn between a desire to write novels and a monetary need to write short stories. He referred to his short story writing as “whoring”); he wrote over 160. A later career as a Hollywood hack proved fruitless, but at least he was able to parody this experience through the character of Pat Hobby in a last sequence of his most outstanding short stories.

Fitzgerald died of a heart attack aged only 44. Dorothy Parker was reported to mutter “poor son-of-a-bitch” at his funeral, a line from Gatsby’s funeral. 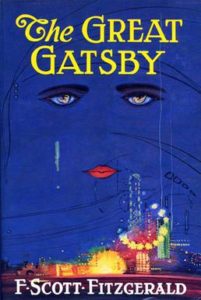 The cover for the first edition printing of The Great Gatsby is perhaps the most celebrated and discussed book cover ever.

The design was by Francis Cugat, a not so well known artist and designer of the time; he specialised in theatre work and Hollywood (he was credited with 68 film set designs) as well as book design. Cugat was born in Barcelona and had studied and worked in Paris as a portrait painter, and had travelled South America.

The cover design was actually completed before the novel was finished. Fitzgerald was so impressed with the design that he added reference to it in the text:

“But above the grey land and the spasms of bleak dust which drift endlessly over it, you perceive, after a moment, the eyes of Doctor T. J. Eckleburg. The eyes of Doctor T. J. Eckleburg are blue and gigantic–their retinas are one yard high. They look out of no face but, instead, from a pair of enormous yellow spectacles which pass over a nonexistent nose. Evidently some wild wag of an oculist set them there to fatten his practice in the borough of Queens, and then sank down himself into eternal blindness or forgot them and moved away. But his eyes, dimmed a little by many paintless days under sun and rain, brood on over the solemn dumping ground.”