The Diamond as Big as the Ritz
F. Scott Fitzgerald

The Diamond as Big as the Ritz was published first in The Smart Set magazine in June, 1922; it was included later that year in his second collection of stories, Tales of the Jazz Age. It is set mostly in Montana, where Fitzgerald had spent the summer of 1915. Fitzgerald referred to this story as a fantasy; he claimed to have written it in his “second manner… designed utterly for my own amusement.” A recurring theme of Fitzgerald’s is his fascination of wealth and hedonism, all that Fitzgerald saw to be the malaise and hypocrisy hidden behind the brash confidence of the America Dream. This story is a satire of the inherent selfishness of the rich and their efforts to prop up grandiose lifestyles. 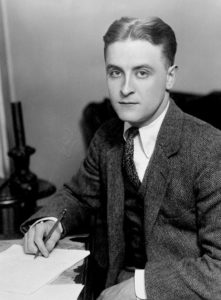 “The richer a fella is, the better I like him,” says the tale’s narrator, John T. Unger, a schoolboy envious of his wealthy classmates. The plot of this allegorical novella reads as a hallucinatory tale; Fitzgerald later wrote that he began the story by trying to imagine the limits of material wealth in a “playful daydream.” It is concerned with one family’s glut of wealth – a secret diamond mine that included a mountain consisting of one enormous diamond – and the lengths they undertake to preserve it, and the corrupting influence of this undertaking. It is a modern-day fairy tale of an obsession with the pursuit of riches. Its ultimate anti-materialist viewpoint had met some objection: Fitzgerald had hoped to place it in The Saturday Evening Post, a paper that had bought many of his short stories before and whose fees, even at this point in his career, underwrote his own excessive spending. But they disapproved of its sentiment and it was rejected.

FRANCIS SCOTT KEY FITZGERALD (1896 – 1940) was so ambitious for his literary career that he finished at Princeton before he had completed his degree. His first novel was published when he was 23: it yielded royalties enough to afford marriage to Zelda. He completed only four novels. His best known, The Great Gatsby, was published in 1925.

Fitzgerald was a standout figure in mid-1920s Paris where, with other American émigrés such as Stein, Hemingway and Pound – together known as the ’Lost Generation’ – he lived a life of excess. His time hereafter in America proved to be difficult: Zelda’s schizophrenia, his developing alcoholism and constant financial difficulties meant that, in H. L. Mencken’s words, “The case of F. Scott Fitzgerald has become distressing.” He was torn between a desire to write novels and a monetary need to write short stories. He referred to his short story writing as “whoring”; he wrote over 160. A later career as a Hollywood hack proved fruitless, but at least he was able to parody this experience through the character of Pat Hobby in a last sequence of his most outstanding short stories.

Fitzgerald died of a heart attack aged only 44. Dorothy Parker was reported to have muttered “poor son-of-a-bitch” at his funeral, a line from Gatsby’s funeral.

Orson Welles’ adaption of the story, a radio play broadcast from 1945

JOHN T. UNGER came from a family that had been well known in Hades—a small town on the Mississippi River—for several generations. John’s father had held the amateur golf championship through many a heated contest; Mrs. Unger was known “from hot-box to hot-bed,” as the local phrase went, for her political addresses; and young John T. Unger, who had just turned sixteen, had danced all the latest dances from New York before he put on long trousers. And now, for a certain time, he was to be away from home. That respect for a New England education which is the bane of all provincial places, which drains them yearly of their most promising young men, had seized upon his parents. Nothing would suit them but that he should go to St. Midas’s School near Boston—Hades was too small to hold their darling and gifted son.

Now in Hades—as you know if you ever have been there—the names of the more fashionable preparatory schools and colleges mean very little. The inhabitants have been so long out of the world that, though they make a show of keeping up-to-date in dress and manners and literature, they depend to a great extent on hearsay, and a function that in Hades would be considered elaborate would doubtless be hailed by a Chicago beef-princess as “perhaps a little tacky.”

John T. Unger was on the eve of departure. Mrs. Unger, with maternal fatuity, packed his trunks full of linen suits and electric fans, and Mr. Unger presented his son with an asbestos pocket-book stuffed with money. ”Remember, you are always welcome here,” he said. “You can be sure, boy, that we’ll keep the home fires burning.”

“Don’t forget who you are and where you come from,” continued his father proudly, “and you can do nothing to harm you. You are an Unger—from Hades.”

So the old man and the young shook hands, and John walked away with tears streaming from his eyes. Ten minutes later he had passed outside the city limits and he stopped to glance back for the last time. Over the gates the old-fashioned Victorian motto seemed strangely attractive to him. His father had tried time and time again to have it changed to something with a little more push and verve about it, such as “Hades—Your Opportunity,” or else a plain “Welcome” sign set over a hearty handshake pricked out in electric lights. The old motto was a little depressing, Mr. Unger had thought—but now ….

So John took his look and then set his face resolutely toward his destination. And, as he turned away, the lights of Hades against the sky seemed full of a warm and passionate beauty.