When Emily Dickinson was asked if she had read Elizabeth Prescott Spofford’s work, she replied, “I read Miss Prescott’s Circumstance, but it followed me in the Dark—so I avoided her;” indeed, Dickinson had requested of her sister-in-the-law that she “send me everything she [Prescott] writes.” Spofford’s ‘gothic romance’ writing was hardly sensational, but her style exhibited a classical purity and she was colourful and luxuriant in her descriptive power. 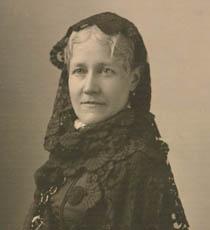 Circumstance first appeared in the Atlantic Monthly in May 1860, one of her earliest of short stories, and was included in William Dean Howells’s The Great Modern American Stories (1921). Based on a true incident in her family history – Spofford’s great-grandmother was brutally attacked by a black panther one night – this story is set in the liminal space of woods in Maine, and follows an unnamed protagonist who, after caring for a sick neighbour, travels home through the woods where she comes into contact with the Indian Devil. It impressed Emily Dickinson as “the only thing I ever read in my life that I didn’t think I could have imagined myself!” Spofford treats the sensational or implicitly ‘romantic’ event realistically and was very much a forerunner of the realist writers that followed her. She also challenged contemporary stereotype views of the feminine in literature.

Spofford published profusely and variously over sixty years, but she is now known more for her short stories than her novels.

Circumstance had remained, during all that day, with a sick neighbor,–those eastern wilds of Maine in that epoch frequently making neighbors and miles synonymous,–and so busy had she been with care and sympathy that she did not at first observe the approaching night. But finally the level rays, reddening the snow, threw their gleam upon the wall, and, hastily donning cloak and hood, she bade her friends farewell and sallied forth on her return. Home lay some three miles distant, across a copse, a meadow, and a piece of woods,–the woods being a fringe on the skirts of the great forests that stretch far away into the North. That home was one of a dozen log-houses lying a few furlongs apart from each other, with their half-cleared demesnes separating them at the rear from a wilderness untrodden save by stealthy native or deadly panther tribes.

She was in a nowise exalted frame of spirit,–on the contrary, rather depressed by the pain she had witnessed and the fatigue she had endured; but in certain temperaments such a condition throws open the mental pores, so to speak, and renders one receptive of every influence. Through the little copse she walked slowly, with her cloak folded about her, lingering to imbibe the sense of shelter, the sunset filtered in purple through the mist of woven spray and twig, the companionship of growth not sufficiently dense to band against her, the sweet home-feeling of a young and tender wintry wood. It was therefore just on the edge of the evening that she emerged from the place and began to cross the meadow-land. At one hand lay the forest to which her path wound; at the other the evening star hung over a tide of failing orange that slowly slipped down the earth’s broad side to sadden other hemispheres with sweet regret. Walking rapidly now, and with her eyes wide-open, she distinctly saw in the air before her what was not there a moment ago, a winding-sheet,–cold, white, and ghastly, waved by the likeness of four wan hands,–that rose with a long inflation, and fell in rigid folds, while a voice, shaping itself from the hollowness above, spectral and melancholy, sighed,–“The Lord have mercy on the people! The Lord have mercy on the people!” Three times the sheet with its corpse-covering outline waved beneath the pale hands, and the voice, awful in its solemn and mysterious depth, sighed, “The Lord have mercy on the people!” Then all was gone, the place was clear again, the gray sky was obstructed by no deathly blot; she looked about her, shook her shoulders decidedly, and, pulling on her hood, went forward once more.

She might have been a little frightened by such an apparition, if she had led a life of less reality than frontier settlers are apt to lead; but dealing with hard fact does not engender a flimsy habit of mind, and this woman was too sincere and earnest in her character, and too happy in her situation, to be thrown by antagonism, merely, upon superstitious fancies and chimeras of the second-sight. She did not even believe herself subject to an hallucination, but smiled simply, a little vexed that her thought could have framed such a glamour from the day’s occurrences, and not sorry to lift the bough of the warder of the woods and enter and disappear in their sombre path. If she had been imaginative, she would have hesitated at her first step into a region whose dangers were not visionary; but I suppose that the thought of a little child at home would conquer that propensity in the most habituated. So, biting a bit of spicy birch, she went along. Now and then she came to a gap where the trees had been partially felled, and here she found that the lingering twilight was explained by that peculiar and perhaps electric film which sometimes sheathes the sky in diffused light for many hours before a brilliant aurora. Suddenly, a swift shadow, like the fabulous flying-dragon, writhed through the air before her, and she felt herself instantly seized and borne aloft. It was that wild beast–the most savage and serpentine and subtle and fearless of our latitudes–known by hunters as the Indian Devil, and he held her in his clutches on the broad floor of a swinging fir-bough. His long sharp claws were caught in her clothing, he worried them sagaciously a little, then, finding that ineffectual to free them, he commenced licking her bare arm with his rasping tongue and pouring over her the wide streams of his hot, foetid breath. So quick had this flashing action been that the woman had had no time for alarm; moreover, she was not of the screaming kind: but now, as she felt him endeavoring to disentangle his claws, and the horrid sense of her fate smote her, and she saw instinctively the fierce plunge of those weapons, the long strips of living flesh torn from her bones, the agony, the quivering disgust, itself a worse agony,–while by her side, and holding her in his great lithe embrace, the monster crouched, his white tusks whetting and gnashing, his eyes glaring through all the darkness like balls of red fire,–a shriek, that rang in every forest hollow, that startled every winter-housed thing, that stirred and woke the least needle of the tasselled pines, tore through her lips. A moment afterward, the beast left the arm, once white, now crimson, and looked up alertly.

She did not think at this instant to call upon God. She called upon her husband. It seemed to her that she had but one friend in the world; that was he; and again the cry, loud, clear, prolonged, echoed through the woods. It was not the shriek that disturbed the creature at his relish; he was not born in the woods to be scared of an owl, you know; what then? It must have been the echo, most musical, most resonant, repeated and yet repeated, dying with long sighs of sweet sound, vibrated from rock to river and back again from depth to depth of cave and cliff. Her thought flew after it; she knew, that, even if her husband heard it, he yet could not reach her in time; she saw that while the beast listened he would not gnaw,–and this she felt directly, when the rough, sharp, and multiplied stings of his tongue retouched her arm. Again her lips opened by instinct, but the sound that issued thence came by reason. She had heard that music charmed wild beasts,–just this point between life and death intensified every faculty,–and when she opened her lips the third time, it was not for shrieking, but for singing.