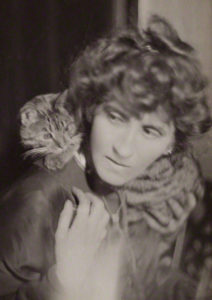 VIOLET HUNT (1862-1942) wrote over twenty novels, a glut of short stories (including two collections of the supernatural), memoir and much else. Yet she is remembered now rarely for her writing, but for three things. Her childhood society included many of the Pre-Raphaelites (she later wrote a rather dishevelled biography of Elizabeth Siddal); Oscar Wilde proposed to her when in Dublin, when she was 17; and her literary salons and feminist voice helped to shape her literary generation. Included amongst her lovers were H. G. Wells and W. Somerset Maugham. Hunt lived with Ford Madox Ford for eight years until 1918; she helped to start The English Review with Ford. She formed the Women’s Writers Suffrage League in 1908 (May Sinclair and Olive Schreiner were active members); she was a prime mover in the formation of International PEN. Her salon entertainment was legendary. She mixed frequently with the literary glitterati of her time, from James and Conrad to Pound and Lawrence, many of whom would feature as characters in her novels. She herself was depicted in novels by Ford (as the promiscuous Sylvia Tietjens in Parade’s End), Somerset Maugham (as Rose Waterfield in The Moon and Sixpence and as Norah Nesbit in Of Human Bondage), and as the main character in Norah Hoult’s There Were No Windows.