GIUSEPPE UNGARETTI was an Italian modernist poet. His poems rarely had much flesh – a few, brief lines was typical fare. B,ut his poetry is held always to be musical and rhythmic, certainly both exquisite and emotional by one enthusiastic Italian close friend, whose word I trust. My friend once insisted that Ungaretti should have won the Nobel Prize. Ungaretti’s denial of this trophy is possibly explained because Italy had won the football World Cup in 1934 and 1938, and the Nobel is a political lottery. I am not an Italian speaker, so in translation I never got the entirety of each poem’s delicacy. However, each brief poem with these short lines must have taken Ungaretti ages, at least five minutes, lazy sod. Or perhaps his pith was encouraged by a typewriter with a broken tab-stop. Hence my ROYAL typewriter, manufactured by Diana Schreib-Maschinenf Abrik in Mannheim, subsidiary of the McBee Corporation of New York. Its green keys sit proud and invitingly, but I’ve buggered up its stop-tab to forbid lengthy lines and to flush out brevity. 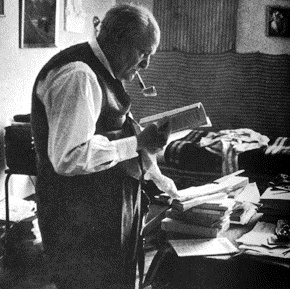 Born in Egypt, 1888, his family from Tuscany, his childhood nurse Nubian, schooled in French by Swiss teachers, schizophrenic in his belief (one minute Catholic, the next atheist, so on), a topsy turvy anarchist (aren’t they all?), Ungaretti met and was influenced by Bergson and Apollinaire when at university in Paris. This scrimmage of temperament and identity settled on Italian nationalism: he enlisted in the First World War only to discover he was actually quite bad at fighting, poetry much more to his taste. His subsequent enthusiasm for Il Duce was safer than the rattle of machine guns, and, like his poetry, it didn’t even have to rhyme. He’d done already symbolism and Parnassianism (art for art’s sake brokered intellectually by Schopenhauer), flirted with socialism, hung out with the Futurists, so he turned to Dada with gusto (why not?) whilst working as a journalist in Paris.

By the early 1920s his political stock was invested heavily in Mussolini. Ungaretti’s clarion call to literary arms – “this people hungers for poetry,” ffs! – met with favour, he helped to shape the Italian Academy with Fascist contours, and Mussolini even wrote the introduction to a 1923 reprint of Il porto sepolto, his first collection of free verse. Fed up with his artistic meanderings, he had invented the junk poetic style of Hermeticism, which allowed him to do away with punctuation, form and syntax – anything that got in the way of poetic laziness, I suppose. Financial despair pushed him to Brazil where he sat out the first years of the Second World War.

Returned to Italy and feted in 1943, his poetry became more formal. Poets too can collapse into conservatism and a more formal style, just as youthful alternative comedians and left wingers do (Ben Elton moved from racy stand-up to sitcom land, take any member of the Oxford University Labour Party, idealistic acne on the wane, medicated by banking and successful capitalism). 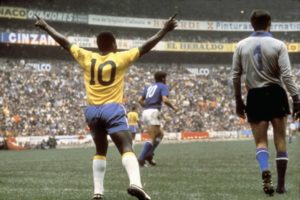 Ungaretti also was sort of forgiven his previous Fascist bite. Or at least he ducked and dived, and he was able to travel the world with success. No Nobel Prize though: Italy continued to place well in the football, though they lost the World Cup final in the month and year Ungaretti died, June 1970. Suitably it was Brazil who won that year, Jairzinho and Pele rampant. I watched it: 4-1.