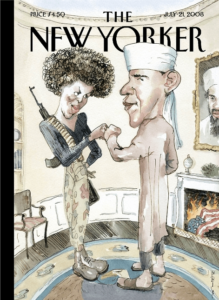 The creation of The New Yorker is a true case of necessity being the mother of invention. In the early 1920s, a New York couple – Harold Ross and Jane Grant – were frustrated with the lack of sophistication in the leading magazines like Life or Judge (where Ross worked) and wanted to create their own title to fill this gap. With Raoul Fleischmann as business partner, they established in February 1925 the F-R publishing company: The New Yorker was born. Ross was famously known to have said about his magazine that it “is not edited for the old lady in Dubuque,” a sentiment reflected by E. B. White, a contributing editor to The New Yorker who, when asked what kind of submissions were wanted, is said to have replied, “I myself have only the vaguest idea what sort of manuscripts The New Yorker wants. I do have, however, a pretty clear idea of what it doesn’t want.”

Over the years the magazine has evolved into an icon of journalism and literary fiction, and its format has evolved into a very set pattern. The first few pages of the magazine are given up to event listings that focus on the cultural life of New York. There is usually one short story, and the rest of the content is all non-fiction articles, notable for their breadth and scope; treasured amongst these are the Profiles – article length biographies of notable people. While it is no longer exclusively a humour magazine, it is renowned still for its touches of humour from its covers to the famous one-panel cartoons that appear throughout the magazine. The current and fifth editor is David Remnick. 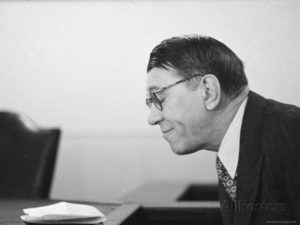 HAROLD ROSS was the first editor of The New Yorker. Said to resemble a “dishonest Abe Lincoln,” he had a genius for attracting talent to his new magazine as well as a reputation for being a careful and conscientious editor, albeit one with a predilection for commas. A workaholic, Ross edited every single one of the 1,399 issues of The New Yorker, from its inception to his death from cancer related illnesses in 1951. His obsession with his work led to the ruin of all three of his marriages, but his legacy lives on in the form of the magazine that he dedicated his life to and which has become synonymous with literary sophistication and cutting edge journalism. Ross was one of the original members of the Algonquin Round Table, an informal luncheon club much prized for its wit, comprising as its nucleus Robert Sherwood and Robert Benchley, also Dorothy Parker, James Thurber, Ring Lardner and others.

E. B. WHITE started his career as a contributor in 1925, and joined the staff in 1927; he contributed articles and opinions signed and unsigned. His writing was pointed, cogent, and mostly very funny. He wrote more than twenty books, including the classic children’s books Charlotte’s Web and Stuart Little.

LEE LORENZ A celebrated and distinguishing feature of The New Yorker is the cartoons scattered across its pages, and Lee Lorenz can be credited as the person most responsible for this. Born in 1933, Lorenz first began cartooning in 1956 and became a contributor to the magazine in 1958; he was its art editor from 1973 to 1993 and stayed on as cartoon editor till 1998. His book, The Art of the New Yorker: 1925-1995, was the first comprehensive survey of all aspects of the magazine’s graphics.

TINA BROWN was the first woman to become the editor of The New Yorker. In a six-year tenure of much controversy, she proceeded to overhaul the entire magazine. Some of the changes she brought were deemed as dumbing down, such as reducing the amount of text per page as well as increasing the coverage of current events and celebrity journalism, and the introduction of photographic content and colour. She let go of seventy-nine writers and recruited fifty new ones. Brown is accused often of being a vulgarian and a wrecker; her supporters argue that she brought up to date and invigorated a magazine that had barely changed in the fifty years previous to her tenure. Either way, she greatly increased the magazine’s circulation and has left a very distinctive mark. 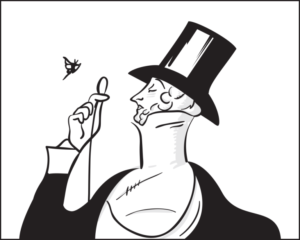 EUSTACE TILLEY is the unofficial mascot of The New Yorker having appeared on its first ever cover. This well dressed ‘man about town’ with monocle was the original hero of a series entitled “The Making of a Magazine,” a hero who performed tirelessly feats of great courage to get his magazine published. At one point he was listed in the Manhattan telephone directory. Eustace Tilley has appeared as the star of countless promotional material for the magazine, and his anniversary appearance in February is awaited keenly.

THE PROFILE is a defining feature of The New Yorker: lengthy biographies of public figures as diverse as Ernest Hemingway, Marlon Brando, Richard Nixon and Richard Pryor. Famed for their immense research, often up to a couple of years, they are seen as definitive con-temporary snapshots of their subjects. They have been anthologized often ac-cording to genre, and these collections have come to represent some of the finest journalism of the last century. The magazine continues this tradition to this day, and is protective of its very high standards.

CARTOONS now form the most marketable part of The New Yorker tradition, and epitomize the founding principle of the magazine: sophisticated humour. And if the magazine’s emphasis has shifted away from humour, the cartoons are still one of the most loved components of the magazine. Often accused of taking non sequitur to an extreme level, the cartoons have managed to permeate all aspects of the social consciousness, from cultural references to being incorporated into the English language (“back to the drawing board” being a prime example). Initially mute, the cartoons were captioned later, and a now regular feature of the magazine is the caption competition.

The New Yorker has been the embodiment of both urban sophistication and literary style for more than seven decades, and it continues to be so under David Remnick, who is very active in capitalizing on the magazine’s rich heritage. Anthologies continue to be published at a great rate: