Sucking Mintoes in the Bath
with Agatha Christie

“Poetry is not the most important thing in life… I’d much rather lie in a hot bath reading Agatha Christie and sucking sweets.” – Dylan Thomas 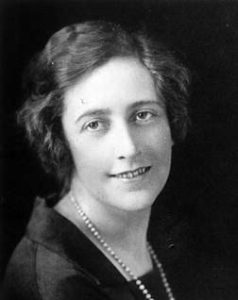 The Orient Express stops during the night, blocked by snowdrifts; next morning the mysterious Mr. Ratchett is found stabbed in his berth and untrodden snow shows that the killer is still on board. This glamorous era of train travel provides Poirot (and “his little grey cells”) with a cast of international suspects and one of his biggest challenges – Murder On The Orient Express has one of the classic whodunit endings. The book was published first as a serialisation in 1933 in the United States, and this gets to the storyboard stuffing of Christie: polite chunks of rehearsed action left on a refined cliffhanger, gentle as she goes. There is never any sense that she put herself our for her writing or suffered for her art, and she might have found it difficult to sparkle today in our blithe cut and paste, copy-thy-neighbour world. She borrowed from what was to hand always, so her characters are often stereotypical (her depictions of Europeans especially are the Brexit cartoons of her day) and her plots are deplorably unadventurous, as slow and predictable as Cheddar cheese turning mouldy on its cheese dish. Her own daytime world was always to the fore, be it her amateur interest in archaeology (…the Orient Express was set near Istanbul, the site of one of her digs) or her pharmaceutical work in the Second World War (the derivation of her insider’s knowledge of poison), whatever came to hand in the non-melodrama of her routine and humdrum life made do. Think of excitement… then don’t think of Miss Marple or Hercule Poirot. Probably Christie put more effort and imagination into drafting the articles of association of Agatha Christie Ltd and tax avoidance than her writing. No development in her craft can be traced, and the only nod she gave to recognising that writing was indeed a craft was that in her later years her novel titles came from Shakespeare, The Bible or T. S. Eliot, suggesting that she saw a bigger literary picture. But no: still her novels rattled on like a local train service running a little behind its timetable – leaving five minutes late from Paddington, 4.55 – and the best you can do as a reader is close your eyes and imagine you are on the Orient Express, but even that is hard.

There was one episode of melodrama in her routine life, but unsurprisingly no mention of it in her autobiography. After an emotional dispute with her first husband, she staged a suicide in 1926 – she drove her car to a quarry’s edge and vanished for ten days – and it unleashed newspaper hullabaloo (the story vied with disturbing stock market news on the front of The New York Times), significant cash reward offers, 15,000 volunteers stepping forward to help 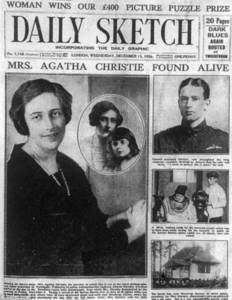 1,000 police officers and several aeroplanes to scour the countryside. Eventually she was found in a Harrogate hotel registered in the name of her husband’s mistress. In this instance amnesia or the depression in her life were the psychological equivalent of the dagger, poison or rope used in her books, and the most likely twist to the plot was that she had attempted to frame her unfaithful husband for her murder. Like Stephen Fry’s later and similar disappearance she only aspired to death (Paul McCartney’s 1969 supposed death and its rampant report in the media, was thrust upon him), but she achieved it in 1976 aged 85, feted, wealthy, her past geography the host to blue plaques on walls, her novels the vapid inspiration for many of her contemporary and future crime novelists.

Also she wrote romances under the name Mary Westmacott, as well as 66 thrillers, 14 short story collections, a clutch of plays. She is the most translated writer ever (an incredible 103 languages); The Mousetrap is the longest running play ever; she has notched up over two billion book sales, a figure which lists her behind only the Bible and Shakespeare on the all-time bestseller list. Quite a few of those two billion books are to be found in any bookshop, and I suggest that to inject some interest into your life – that is if you’ve had enough of weaving your macrame duvet cover, digging a hole and filling it in again, or you’ve come to the end of that jigsaw puzzle of a municipal park bench and run out of cocoa – do go and buy one, read it and enjoy the literary paint drying on the page (in my opinion). Each to their own, and she has offered comfort or distraction to many over the last century. Alas I never cracked her code.

High church or low(brow), poorly written or exquisite, the crime and whodunit genre is thankfully far larger than Agatha Christie and her lack of mode: some of her stablemates in the genre do hit the high spots. Her near contemporary Josephine Tey had brave intent and far sightedness, Margery Allingham really did mature like fine wine, an innocent witness to the golden age of detective fiction who became more guilty as it took on more of the sharper edged, neon violence of city life – Chester Himes or Evan Hunter in the States, Gerald Kersch in England; the psychology and morality of Patricia Highsmith is a world apart from the clumsy mechanics of Christie. The Big Sleep, for instance, written by another of her near contemporaries, Raymond Chandler, is a big book in every way. You couldn’t even imagine Agatha Christie coming up with this exchange between Vivian and Marlowe:

“You go too far, Marlowe.”
“Those are harsh words to throw at a man, especially when he’s walking out of your bedroom.”

Agatha Christie’s Marlowe would have found the door locked, offer hints as to why he was leaving, fuss over the detail of the door’s architrave (all to be revealed later after canapes in the drawing room), but at all times would be as wooden as the door itself.

“There must be some connection between the general nullity of Christie’s prose and the tendency of her detectives to take Jewishness as a symptom of crime.”
– Christopher Hitchens