EDMUND CRISPIN’s The Moving Toyshop is one of the classic Oxford novels. Crispin was the pseudonym of Robert Bruce Montgomery, a composer of vocal and choral music which included An Oxford Requiem (1951). Hindered by a lack of musical self-belief, he found it easier to turn his hand to film work and pocket money; he wrote the scores for many British comedies of the 1950s (including the first Carry On films – for which he should have been shot, Charles Hawtrey their only redeeming feature). Crispin wrote short stories and nine detective novels which featured Gervase Fen, a Professor of English at the University and a fellow of the fictional St. Christopher’s College, housed next to St. John’s College, Crispin’s alma mater. Fen is an eccentric and absent-minded character, and each whodunit tale has a fantastic and unbelievable resolution; his work included examples of the locked room mystery, the preserve of his colleagues and great heroes in the Detection Club, an ensemble of now classic crime writers of the time, John Dickson Carr his idol. The books were written in a literary and sometimes farcical style, they speak direct to the reader even: during a chase sequence in The Moving Toyshop, for instance, Cadogan, Fen’s friend, suggests that they “go left… After all, Gollancz is publishing this book” – Gollancz, of course, a left wing publisher. The books contain frequent junk reference to English literature, poetry, and music. Fen’s car, nicknamed Lily Christian III, was a character in the books and was described often when driving around Oxford, this a forerunner of Morse’s beloved Jaguar (although pedants know that Colin Dexter wrote of a Lancia in his novels). 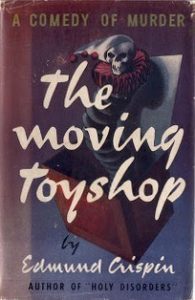 Incredibly P. D. James included The Moving Toyshop in her list of the five most riveting crime novels. In truth it is not a top rate read, in fact it is quite naff. But it is an interesting period piece and it is redolent of the era of the overly large Oxford donnish personality, the W. A. Spooners and Maurice Bowras (for whom buggery was “invented to fill that awkward hour between evensong and cocktails”) who strode as bloated mini-colossi in the early and mid-twentieth century through the University (Gervase Fen, surmised Philip Larkin, was based on the great philosopher G. E. Moore, Crispin’s tutor). The privileged age the book describes is wealthy, spoon-fed, sexist, whimsical and deadpan, even selfish. Crispin himself was like the world he portrayed, certainly indolent and spoilt, and he enjoyed acres of free time and laziness, the luxury of a train journey its masthead (in a first class carriage obviously, always described in his novels with glee and affection). His musical success offered him a financial blanket and his life collapsed into chain smoking, hapless sex (even in his books it is the secondary characters who get to have it off, never Gervase Fen), alcoholism and indolence (he wrote very little music in his last twenty years, and he didn’t publish a novel for over 25 years after 1951, which reminds me of the comedian Peter Cook’s witty riposte when a friend announced that they were writing a book – “neither am I” – the later Peter Cook so reminiscent of Crispin’s similar denial of purpose). Crispin settled in North Devon where he was devoted to his church attendance, bridge and reading (he read forty books each month for over five years whilst reviewing for The Sunday Times); he avoided the fast pace of London, yet died of alcoholic complications aged only 57.

The Moving Toyshop is haphazard and gentle; like all his writing it is swamped by abundant and throwaway humour and is reliant on coincidence rather than studied footnote. One early reviewer was aghast: “heaven help if you’re expecting detection.” But any novel once dressed in the fine Penguin crime livery has to be cherished. It is dedicated to Philip Larkin, Crispin’s friend and contemporary at St. John’s College.

Larkin wrote of Crispin as a student that “Bruce was lazy but with a far brilliant brain than I; I was lazyish, but vaguely industrious, doing a deal of undirected work. He was expected to get a first by nearly everyone, and the responsibility weighed on him, driving him to the bar of the Randolph but rarely to his desk and books.”

Here is a page from Crispin’s diary in 1966, his life fretful, forlorn and still defiantly unfulfilled (until its end):
2nd January “Hangover. Day in bed.”
3rd January “[N]othing accomplished. Must have read, but can’t remember what. Must have drunk a bit, too. Again futile.”
4th January “Much too much drink.”
5th January “Gave up smoking, god help me. No drink all day either. (No work, either). Reading Ngaio Marsh’s ‘Swing, Brother, Swing’–poor, and if she’s going to write about jazz bands, why the hell can’t she find out something about them? ‘Tympanist’ indeed.”

In life Crispin was never the tuned tympanist, rather he was a hi-hat, only peripheral even if persuasively percussive. Crispin’s books, too, are peripheral, although each has flashes of careless brilliance amidst its deep flaws.