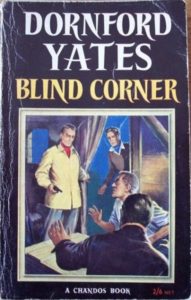 It is wonderful to judge a book by its cover, to date a book by its cover also. Here is a nostalgic-looking second-hand edition of Blind Corner by Dornford Yates, an author who ransacked trade book sales in the interwar years, a time when England was confident still internationally – it had just seen off the Boche – and had enough self-belief to distil heroism to honour and the stereotypical. The book celebrates the rugged rather than the muscular (it is heroism rather than brute force that is to the fore), and in essence it is a print version of a Richard Widmark film. The cover is suitably somewhat heroic – we know who is the skulduggery and who are the good guys, and its heroism matches the book’s threaded and heroic narrative, tortuous twists involving the buying of a castle and servants dispatched on long haul treks. Published in 1957 by Ward Lock (the original publisher), this paperback is the book’s twenty-fourth reprint, and the cover still smacks of the ideals of the original publication date, and in 1957 I am not sure those design ideals thirty years after would have been viewed as nostalgic. 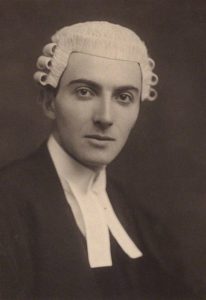 Dornford Yates (real name Cecil Mercer) made the best out of his own life’s failures. A third class degree in Law at Oxford meant access to the bar was difficult, so he fell back on nepotism and was placed as a pupil to a prominent barrister whose practice required work for the police commissioner and high profile cases (Mercer was the first to see the legal brief for the poisoner Crippin in 1910): this flirtation with the shadowed world of London crime provided him with much fodder to drop like confetti into his thrillers. After the First World War’s interruption, Yates determined to focus on his novel writing; hitherto a clutch of short stories had been published in The Strand and similar dramatic and end of the Empire style magazines. To reduce his financial footprint and make life easier, Yates moved to France in 1922; the Second World War forced a further move to Rhodesia, where he died in 1960.

He is remembered mostly for two series of books. His ‘Berry’ books, some autobiographically derived, are pithy, each short story is related or overlaps, their depictions of the decline of Edwardian upper class lifestyle, with its backdrop of monetary inflation and economic decline post-Great War, are humourous, Wodehouse-like but more interested in tax avoidance than cricket.

The ‘Chandos’ series of books – thrillers through and through – are much more dramatic and gritty (for their time), and Blind Corner, published in 1927, kick-started the series; titles that followed included Perishable Goods, An Eye for a Tooth, and Cost Price. These books are for blokes who never grew up, but are somewhat charming in their innocence and aspiration, at least when pitted against their modern day equivalents – Jack Reacher or Jason Bourne, neither of whom could be described thus: it “was not Mansel’s way to shoot a man in the back.” Yates was a kindred spirit with Sapper and John Buchan – gloriously referred to by Alan Bennett as the “Snobbery with Violence” school of writing, that “runs like a thread of good tweed through twentieth century literature.” The books are ignorant of the law and its procedure, its heroes are bereft of any contact with official lawmen, customs’ control is an irrelevance (it would be an inconvenience if otherwise), but the motivation of the main characters in the stories is fun rather than duty. Richard Chandos (who has been sent down from Oxford for “beating up some Communists”) with his two sidekicks Hanbury and Mansel stampede across continental Europe heading big time criminals off at the pass, protecting innocent lives, chatting up high class floosies (the Hollywood one-foot-on-the-floor maxim applies but you do get the sense that Chandos does indeed get his end away when we aren’t there), and perhaps amassing a small fortune in treasure along the way (it’ll be the usual treasure described in the ‘Famous Five’ books by Enid Blyton, the filigree of each story is quite childish). Yates’ character and place names are Belisha beacons of naffness. Villains like Oliver Bleeding, Douglas Bladder, Sycamore Tight or Coker Falk; solicitor firms like Aaron and Stench, or Oxen and Baal; villages called Broad i’the Beam, or estates called Mockery Hall. Blind Corner is set in Austria. Yates narrates on the back cover that the story is told “without any frills… After all, men do die, and secrets do pass…”

When the shop opens tomorrow, there will be a free pot of tea for anybody who wants to savour the whiff of a previous age and spend £2 on the book. To get here of course, you have to cross a field of crocodiles, climb rampart walls, fight Slasher and Hans, the two heavies who guard the shop’s perimeter fence, vault it, break into the casino attached to the shop, and then search for the secret code that unlocks the safe. Unless Richard Chandos has got there already…