A collection of three short stories that explore nostalgia and eroticism in the fragments of modern Europe. From the youthful Ilke, through the middle-aged Ignacio to the elderly Catherin, these stories weave together to form a tapestry of desire that grows stronger and more fulfilled with age. With echoes of Kundera and Murakami, a gentle but insistent theme of hope and tenderness amidst the ruins builds to a heartbreaking but uplifting crescendo. 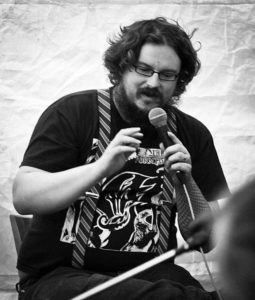 DAN HOLLOWAY is an Oxford based writer, publisher, poet and performance poet, curator of the performing troupe the New Libertines, and Oxford’s Not the Literary Festival. His alt novel The Man Who Painted Agnieszka’s Shoes earned him a place on Mashable’s list of the top 100 writers on Twitter; his dark thriller The Company of Fellows was voted the ‘favourite Oxford novel’ by Blackwell’ Bookshop readers.

“Dan Holloway is something of a phenomenon: poet, novelist, publisher, commentator, event organiser and promoter; there isn’t much connected with literature that he doesn’t do, and do with gusto and a probing desire to experiment.” – Sabotage Reviews

In the first story, Lotte’s Rats, an ambitious scientist plots alone in her flat in 1930s Berlin. Her experiments, stolen from colleagues she has sent to their deaths in the madhouse and concentration camps, are sure to impress the new Minister of Propaganda. But a lifetime spent learning to control those around her is about to come back to haunt her as for the first time she falls under the spell of a more skilled manipulator than her.

“In 1933 the brilliant scientist Liselotte Fröhm carried out an experiment with rats. She showed that, if a dopamine precursor were administered at the right moment as few as 4 times, even without a food reward the rats could be trained to pull a lever ad infinitum, until eventually they died of starvation and exhaustion. If she had been less of an empiricist, or perhaps if she had been more of one, she might have recorded her observation that even when the dopamine reward was stopped the rats’ beady little eyes seemed to film over and remain transfixed on the lever.”

In Coastlines a Spanish civil servant drives through the heart of the country to his mother’s home town where he must build a car factory to stop the town sinking into the desert. His companion on the journey is the Chinese businesswoman sent to finalise the deal. The woman who had been his first lover, decades earlier.

“The arrival of budget airlines at Murcia and Almeria has, it is true, introduced this corner of Spain to a wider international public. For the very few who make it beyond the coast and into the remarkable area that contains Europe’s only true desert, though, it has introduced them to little except extreme poverty.
Images had been playing in Ignacio’s head for years. The ravined sandscape of the Tabernas Desert, the cave dwellings of Purullena with its strings of peppers drying in the sun; people who still lived without many of the most basic amenities despite the tourists. People like his mother.”

In the final story, Coming Home to Die, an elderly lady sits among friends in a care home. Together they remember the loves of their distant past. But Catherine has no interest in the past. She is certain a young Polish man is on his way to marry her.

“I’ve heard,” Mary said, looking at the large oxygen cylinder, “that cats go away to die, whilst dogs come home. Which are you?”
Catherine was clearly laughing but it sounded more like the noise of breath escaping from an organ bellows, “On the contrary, I’ve never felt more alive. I’ve come here to get married.”
“I’ve left everything,” Mary said, without registering the slightest surprise, “my husband, my children and grandchildren, my cat. Even my shoes.”