Five related short stories about a twelve-year-old child and her view of the world, shaped hitherto by her narcissistic mother. In these stories we witness her discovery and awareness of her independent self, and the beginnings of her rebellion against her mother – through her care for a cat, her choice of shoes, her sense of adventure and quest for adolescent lust – and her tilting at a true identity, as she gazes at graffiti: “what if everything you ever did could never be wrong?” 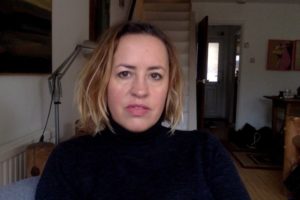 Olivia Stewart Liberty is an Oxford-based writer who has written for The Spectator, Independent and many other newspapers. Her first novel, Falling, was published by Atlantic in 2007 (Independent: ‘luminous’; The Times: ‘funny and moving’). After co-authoring The Return of the Sloane Ranger with Peter York she took a break from writing to set up the Bath-based front door painting business, Full Frontal. The work was more demanding than she expected so she came back to writing. In 2015 she was shortlisted for the Bridport Prize. This is her first collection of short stories. http://www.oliviastewartliberty.com/

“It was raining when she found the cat.
It was white and ginger and crouched up against the wall, its bones showing through like a cheap tent.
It shrank from her and when she came closer it opened up its mouth to hiss.
It sat with its eyes closed as though sunbathing.
She wanted to bring it inside.
Her mother said no.
She asked if she could put it in the shed: it seemed like the right direction.
Her mother agreed and she set about it as though it was her life’s work: emptying a cardboard box, one that bananas got flown over in, finding an old sheepskin and a towel and fitting them down into the corners.
The cat, strange in the rain, stayed under the wall, its eyes closed and panting. From time to time it shifted as though something inside it hurt.”

“When she was twelve she had some money – probably from babysitting – and she got a ride into the town her mother called sink.
She’d seen a pair of shoes in the sale in a shop which whored its wares in baskets on the pavement. And she had the idea these shoes – high and red and white in candy stripes with a flirty little peep toe in the front – had the power to erase from her life everything that was wrong in it.
They were shoes that women wore who owned the world. And on the golden screen of her mind she’d seen them pick a path beneath the hem of a tartan skirt so tight she’d had to sew herself into it and swagger along the lip of a swimming pool which pulsed blue and bright-lit. And each place that each heel pierced plotted another point on her course to freedom.
The girl had seen this opportunity for happiness and she would take it.”

“Everyone said the girl looked a lot like her sister, the one who was eighteen.
Gosh they said and showed their teeth like it needed saying, aren’t you and X alike?
Because of that they made a plan. They went into the shop, the girl first and then the other.
Four cans of Special Brew she said.”

“She slid past her mother and went out wearing everything she had on the outside pretty much. Especially her wild and hungry heart.
It was the other girl’s mother who gave them a ride into town. The three miles down the hill and onto the dual carriageway and into the turning where the library was and behind that the hall. They got out and they stood in the line with the others most of whom they knew from around including the boy this other girl they knew lost her virginity to on the school playing fields when she was eleven.
Eleven. Years. Old. (Grim.)”

“Her mother was on the phone and the gaiety of her song filled the house, The Whole Lot she cried out and the words lifted on a flock of gulls.
He Ate The Whole Lot. We’ll Have To Have Boiled Eggs And That’s That Til Kingdom Come.
Her laughter came on wings to fill every corner even the ones all the way up here at the top where the girl knelt to pack a bag: the blanket from her bed and the one from her sister’s rolled together tight across the carpet. Knickers, socks, the miraculous orange Chanel dress she’d pulled from a pile at the jumble sale the weekend before and tights. Three pairs of thick wool tights even though it was summer. On top of that she put the eight hole DMs she’d swapped with her friend’s sister for Hunky Dory.”